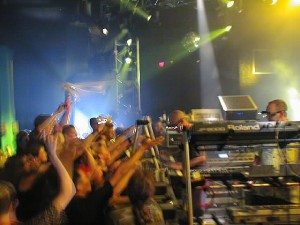 Back in 1999, the electronic duo Orbital played a sold out show at the Austin Music Hall. I had first seen them in 1996 as we were doing publicity for their first tour in the US. I had no idea how that night would change my life and begin my love for dancing and electronic music. After their sold out show at the Music Hall, I went to the tour bus and insisted that they would remember me from the 1996 tour. Sure enough they came out and my friend John Cunningham, Katie Claire and myself were able to hang out with Phil, Paul and Mickey their sound engineer in the back of the venue on a large boulder by the creek that is there. We spent a good two hours just talking about electronic music, Orbital’s music, and listening to Phil talk about what an electronic musician needs to have in the studio to make beats. This was by far one of the best nights I have ever had! I am in the picture above as at the end of their awesome set, they let people stand on the subs that were in front of the stage to get closer to them and the music! Purely awesome!